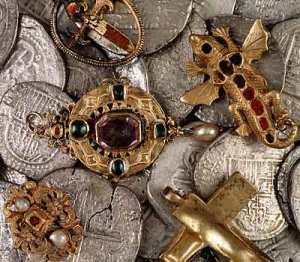 Imagine having a treasure trove of 16th century artefacts on your doorstep and doing absolutely nothing to preserve them.  This would appear to be the stance of the National Monuments Service and their Underwater Archaeology Unit regarding the Spanish Armada wrecks being lost to our ferocious Atlantic currents.  But what’s this got to do with me?  Well, my first novel, The Cross Of Santiago was inspired by the events of 1588 and the Armada’s demise along the Irish coast.  Just recently, I wrote about the discovery of wreckage washing ashore following some severe winter storms here (the very latest being a small cannonball), but a recent article in the Irish Times has got my blood boiling again!

Hiram Morgan from the University of Cork points out in his article the many benefits of a government led project of recovery, conservation and ultimately display of the untold artefacts currently under threat.  The image above is a just a sample of the rich treasures found on La Girona, a ship that sank just off the Northern Coast and is currently on display in the Ulster Museum and generates great interest among locals and tourists alike.  When I was researching this time period for my novel, I couldn’t believe how Ireland had been the setting for such an important time in European history.  I have no recollection of learning anything about this at school and I have to agree with the author of the article, that we are really missing out on something historically unique and valuable if we lose these treasures to the sea.

Morgan praised the efforts of locals, who have become ‘citizen archaeologists’ in an attempt to monitor and report the situation.  A local group – Grange and Armada Development Association are hoping to establish Grange as the Armada Centre for the whole of the Island of Ireland.  Now of course, the ship in my own story wrecked in Connemara, but I doubt whether there is anything left of the Falcon Blanco de Mediano, so I’ll give them this one!  But seriously, it’s important that we create a heritage site somewhere that commemorates the souls lost on our shores and an interpretive centre for locals and tourists.  Even in Galway, the vast majority of residents are completely unaware that around 300 soldiers and sailors were executed in Forthill cemetery on the order of Governor Bingham.  There is a plaque which was erected in 1988 by members of the La Orden Del Tercio Viejo Del Mar Oceano, the oldest marine corps in the world, but it is hidden behind the cemetery walls, quietly keeping watch over the sacred ground.  The memorial is only written in the Irish and Spanish language as an intended snub to the language of the perpetrator.

We really need to preserve our history and that of our European neighbours, so I hope that by highlighting the issue and making people more aware of the history that is right at our fingertips, we can lobby our government to invest in this priceless endeavour.

You can read the Irish times article here:  A race against time to save Spanish Armada wrecks before they are lost forever.

And if you like historical fiction, why not read my book?