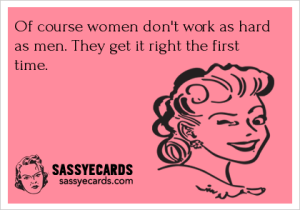 As women, not only are we working the rest of the year for free thanks to gender pay gaps, but there’s another (slightly less important) area where we are being short changed.

So I’m swanning around the aisles of my local pharmacy (for swanning read frantically racing around just before closing time) and looking for hair colour.  Yes people, I’m outing myself as a home colourer(er).  Anyway, in my quest to be my best beautiful, or whatever crap the cosmetic industry are spouting at us these days, I’m scanning the shelves for something that’s quick and easy.  With a gazillion different shades to choose from, I’m left holding boxes up to my hair in a tiny mirror to see if I want to become an Icy Blonde, a Honey Blonde or a Butterscotch Blonde.  At this rate, I’m becoming an extremely confused blonde (hold the jokes please) and that’s before I’ve even gotten to the numbers.  3 is permanent and 2 is semi permanent, so what does that make 1?  Your ex-boyfriend who had major commitment issues??

Caught in the paradox of too much choice being no choice at all, I spy something from the corner of my eye, in the men’s aisle.  It’s a ruggedly attractive man, smiling at me and promising to colour my hair in 10 minutes.  TEN MINUTES??  It must be some kind of mistake, for we all know (don’t we ladies) that colouring your hair takes 30 minutes at the very least.  Doesn’t it?  But they even have this fancy comb applicator thing that eliminates the need to become an amateur chemist for the afternoon, mixing various tubes and bottles.  And what’s this, an auto-stop feature that shuts off the colour when it’s reached your perfect shade??!  My hand reaches for the box, but I stop short.  It’s just for men.  I can’t use that.  It’d be like using a man’s razor.  Our razors are all pink and flowery and stuff.  Their razors are so…. plain!

And that’s when I start to think, we’ve been sold a pup!  It’s okay for us to spend half an hour choking from ammonia fumes, but men can whiz along the road to follicle fabulousness in less time than it takes to have a shower.  And Just For Men doesn’t boggle the mind with an ever-increasing colour palette.  It’s just brown and two or three shades either side of brown.  Simples.  Why does the beauty industry assume that women have all the time in the world to devote to these inane jobs, while sparing men the tedium?  They’re obviously far too busy and important to be bothered with such trivialities, but as for the female population, what else would they be doing apart from making themselves beautiful?  (that’s their best beautiful mind you, not just average!)  I’m holding out for a Just For Men hair removal cream that won’t make the house smell like a nuclear explosion, or wax strips that feel like goldfish kissing your skin while gently leaving your legs smooth.

Maybe it’s time we all took a peek down the men’s aisle – it might not be pretty, but you might just save yourself some time.. and money, which is only fair seeing as we’re earning less.

2 thoughts on “Just For Men”