I enjoy a challenge.  And if I can do it sitting down, all the better.  Cue my obsession with reading and writing dual timelines.   The marmite of the literary world, dual timelines can either thrill or annoy a reader and as a writer of the genre, I’ve found myself oscillating between both emotions on more than one occasion!  (Often at the same time, but that’s duality for you).

First things first:  What is the difference between dual timelines, time-slip and time travelling?  Like branches on a family tree, they all bear a close resemblance, but have their own individualistic quirks that mean Sunday dinner will always be a tricky affair.  Dual timelines do exactly what they say on the tin; there is a story with roots in the past that affect the present, so both stories are told side by side.  A good example is Diane Setterfield’s The Thirteenth Tale, where a famous writer tells her life-story to a biographer.  Time-slip tends to involve a twist of the paranormal, where a character has flashes of a past life or in the case of Susanna Kearsley’s novel, The Firebird, the protagonist has a kind of psychic ability that means she can sense stories from the past merely by touching an object.  Time-travelling hardly requires any explanation, but I’ll just say Outlander and leave it at that!

My first introduction to this genre was when I read Labyrinth by Kate Mosse (who, it turns out, is not a supermodel but a highly successful author). Instantly, I knew that this was my kind of book. It had mystery, intrigue and… shut the front door – two parallel stories in different time periods! It felt like I was getting two books for the price of one – a bargain. As a writer, ‘time-slip’ opened up a whole new world of story-telling to me.  It’s such a dynamic genre, allowing you to trace the influence of the past on the future, creating layers to draw the reader in.  But how do you go about writing what are essentially two separate stories and deftly weaving them together?

The most obvious feature of a dual timeline novel is the parallel narrative that runs throughout the book. It’s vital that the narrative is equally engaging for both the contemporary and historical sections of the book, otherwise you risk losing the reader’s interest for large portions of the book. While both stories are connected, they must have enough appeal in their own right to engage the reader. When writing my debut novel The Heirloom, the most important aspect for me was providing each section with its own unique ‘voice’ in order to convince the reader that they are really moving from one time period to another. The whole atmosphere of the story changes – the dialogue used in 16thCentury Ireland is very different to that of the present day, so it can be a challenge, almost like writing two completely different novels at once.

The next feature of time-slip writing is research. Historical fiction is a genre that requires meticulous researching and the dual timeline genre is no different. The setting for my first novel was medieval Ireland, 1588 to be precise, when the Spanish Armada wrecked upon our rocky shores in one of the deadliest storms ever recorded. I probably spent the best part of a year researching 16th Century Europe and the battle of the Armada against the Royal Navy. I also had to research life in Ireland at that time, which was under foreign rule but, especially in the West, remained quite independent in their laws and culture. Everything from what they ate, what they wore and what they believed in (Brehon Law still existed at that time) was crucial to create a realistic picture. I didn’t just stick to books and websites; I watched movies set in and around that time, documentaries and visited museums. You simply cannot know enough about your setting, which brings me nicely on to my next point.

Try not to force-feed the facts to your reader – they will not appreciate it! It can be so tempting, after months of researching your subject, to thrill (or bore!) your readers with every minute detail you picked up along the way. But you have to know when enough is enough. It’s important for you to know the background to the story, but the reader doesn’t need a history lecture, so you have to find a way to weave the facts into the story and keep the reader entertained as well as informed. The time-slip genre does tend to have some paranormal plot devices which require the reader to suspend belief to a certain degree, so when you’re writing fiction, make sure you get your facts straight!  A good piece of advice is to know more than you put on the page.

Now the trickiest and most enjoyable part of writing dual timelines is connecting your stories, so that each has a bearing on the other. The pacing of both stories is paramount to the genre’s success, so you have to carefully develop the plots from both timelines at an even pace.  The switching needs to be seamless so the reader can keep up and transition easily from one timeline to the next.  That’s really where your characters and settings come into play, because you want your reader to anticipate each narrative as it unfolds.  In my current novel, the sections from the past are told in the first person, while the present day parts are told in the third person.  This automatically changes the tone and offers the reader a different perspective on each timeline. As I said, both timelines should be strong enough to stand on their own, yet contain all of the thematic links that bind the stories into one. It’s a delicate balancing act, but if done successfully, it’s a genre that can be a thrilling ride, for reader and writer alike.

Every author has their own approach to writing dual timelines and this can vary with each book.  The Heirloom was written in sequence, but my new novel (which is also dual timeline) was written in separate blocks.  I wrote the present day first and then focused entirely on the past.  I found that really allowed me to immerse myself completely in that era (which happens to be the early 1900’s, just before the war).  However, either approach has its challenges so you need to do whatever you can to get yourself into the zone.  One of the most powerful tools I have for getting into that head-space is music, and I listened to lots of traditional Irish music and folk songs written at that time.  Music has a timeless, ethereal quality that really helped me to let my mind drift back through the ages and channel the past.  Again I read biographies and other works written at that time in Ireland and hopefully I’ve achieved an authentic setting for my novel.  The real fun began when I had to try and weave the stories together!  But like I said, I enjoy a challenge.

The dual timeline genre is such an intriguing idea and in fact it was a book I read about past life regression that gave me the inspiration for my first novel. It offers endless possibilities for writers and there are no rules as such. But my one piece of advice is this: Write about a time period you are passionate about. I was fascinated by the Armada landing in Ireland and how the locals tried to help them hide from the authorities. I rented a cottage that overlooked the bay where the ship I was writing about sank. I visited the graveyard in Galway City where a plaque erected by the Spanish Marine Corps remembers the Spanish Soldiers who were executed by the English army. I don’t think I could have written this story if I wasn’t so passionate about the human story behind historical facts.

So while dual timelines might seem like a niche genre, I have seen its popularity grow over the years.  Writers like Kate Morton and (ahem) myself are bringing these kinds of stories to a wider audience of readers who like their history with a dash of contemporary on the side 😉 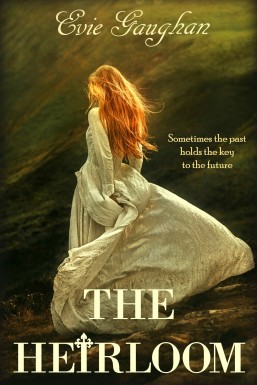 Read my dual timeline novel The Heirloom on Amazon