“Find out who you are and do it on purpose.”

I saw this quote on Twitter the other day from the movie Dumplin’ and simply had to ‘borrow’ it immediately! We don’t get this message enough – Be More You! This time of year is always associated with being a better you – a better version of yourself. Gyms have made a fortune out of our annual guilt and the rush to become someone else. But where did all of this start?

New Year’s resolutions have been around for quite a long time (according to Wikipedia!). The Babylonians made promises to their gods at the start of each year that they would return borrowed objects and pay their debts. So for all you book lenders, now’s the time to turn the screws on all those friends/neighbours/relations who haven’t returned them yet. The Romans made promises to the god Janus, for whom the month of January is named. And in the Medieval era, the knights took the ‘peacock vow’ at the end of Christmas to re-affirm their commitment to chivalry.

However, the whole idea of self-sacrifice or self-improvement has really jarred with me over the last few years. I’ve hopped on a bandwagon that’s headed in the other direction, the one that asks – ‘What can I do more of this year? What do I love doing? What will make me happier?’ In a world where we are constantly being told to be our best beautiful, or whatever, we are seldom (if ever) taught to value who we really are. Or how to cultivate a life that honours our true self.

One good thing about getting older is that we get a better sense of ourselves and are a little less influenced by others and their opinions of us. Just as in my writing, I’m aiming for the kind of authenticity that comes when you stop trying to be something you’re not and begin to embrace who you are. As David Bowie once said: 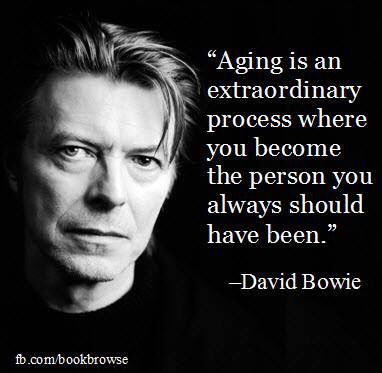 I think the knights had it right – New Year is a wonderful opportunity to re-affirm your commitment to be yourself. You don’t need to change, or improve (not unless it’s what you want) and besides, as Arnold Beisser once said in his paradoxical theory of change: 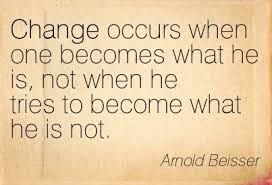 So my wish for you all and for myself in the New Year, is to be more of who we really are. It’s our diversity that makes us interesting, our fallibility that makes us endearing and human. There is enough conformity in the world – so break out and be you with bells on! As Dr. Seuss said, there is no-one alive who is youer than you 🙂