Hello my people! Wow, I’ve really abandoned this blog of late. I could blame, you know, the global pandemic and stuff, but the real reason is that I’ve been saving all my writing for my new book (which I am SUPERDOOPER excited about!!) It’s a slightly different genre, no history or magic, but lots of humour and uplifting themes around relationships and finding your place in the world. Sometimes I wonder if it even matters what genre you write, as most writers tend to return to the same themes, no matter what the plot. And my theme is always that of self-discovery, which I think we’ve all done a lot of over the past few months.

When this all started, I did what I usually tend to do in a crisis – ignore it! I figured it wouldn’t affect my lifestyle because I work from home anyway, so what would be the difference? I tuned out the news and escaped into my book. But after a few weeks, I just hit a wall. It became clear that I wasn’t immune to everything that was going on and it was expecting waaay too much of myself to remain unaffected by it. Anyway, I won’t dwell on it, it’s been weird for everyone, but luckily I had these wonderful characters and their story to return to. But – I don’t know if anyone’s told you this – writing is hard! There’s always that doubt in the back of your mind, “Will I finish this? Will it be good enough?” So, when I typed the words ‘The End’ this week, I felt all the feels! It was emotional, joyous, hopeful and kind of surreal. It was really when I printed it out (I find it easier to run through the second draft on paper) that it hit home – I’ve made another book! My fourth!! It’s something like a little miracle. 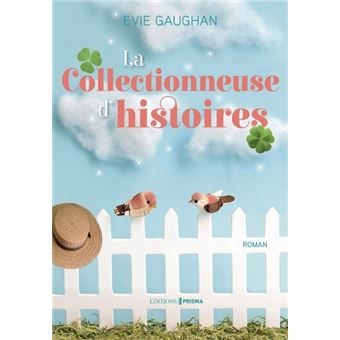 I don’t know where this story will take me – that’s the joy/uncertainty of being a writer. You just never know. My last book has just hit the shelves in France this summer – I never dreamed in a million years that The Story Collector would be translated into French! La Collectionneuse d’Histoires And now I have a French publisher and a translator! It still hasn’t really sunk in. I had a good feeling about that book when I was writing it and I have a good feeling about this one too. It’s got something special – even though it was (like all books) a challenge to capture the ideas in my head on paper, it sort of flowed too. I just had to be present and let the serendipity happen.

Anyway, that’s what I’ve been doing and I can’t wait to get editing and get this story out there!! I want you all to enjoy this story as much as I have enjoyed writing it – giggling at the funny scenes and tearing up at the emotional bits. It’s a journey. And now my brain wants to outline ideas for book five, because if there is one thing I’ve learned it’s that there will never be a better time to do things than right now. Plus, I feel kind of lonely without a work-in-progress, so when one cast of characters move out, another bunch move in! With more interesting stories to tell and challenges to face. I’m fortunate that I can create fictional worlds in order to better understand this one – giving myself and my readers somewhere to escape to. If we didn’t value storytelling before this, we certainly do now. The arts is what has kept us all going – distracting us, consoling us, entertaining us.  So if you’re thinking of writing a story – DO IT NOW! The world needs more stories.

Don’t forget, I have two FREE short stories that you can download now … Betwixt is consistantly in the Top 5 on Amazon and Girl in the Middle is a tongue-in-cheek look at loneliness in the modern world. And if you like those, please buy the other ones/leave a review! x

Art is never finished, only abandoned.

Creativity is something that refuses to be measured by calendars; laughs at deadlines and always begs the question, ‘Could I make this better?’  Leonardo is right, at some point you just have to walk away, but how do you know when that is?

As many of you will know, because I keep harping on about it, my new novel The Story Collector will be published next year by Urbane Publications (woohoo!)  Yes, I’m still woohooing and plan to woohoo for some time to come.  Anyway, I’ve been working on this book, on and off, for about 18 months.  In my eyes, it was ready.  It’s been alpha read, beta read, edited and all that remained was a final proof read.  Or so I thought.

I joked with my publisher that, bar any new characters coming along and upsetting things, I should have the final draft in by our agreed deadline.  Well guess what?  A new character came along!  Well, not entirely new, but she was minor at best.  All of a sudden, she has loads to say and to my amazement, lifts the whole story an extra notch.  How did this happen?!  I often find myself writing about the creative process and how so much of what we do is fumbling in the dark, while equally holding on to the belief that we are being guided.  The original idea takes a perilous journey through countless drafts and rewrites, and much of the final touches are finding your way back to where you started.

I also paint and the process is exactly the same.  You have an idea in your head and from the moment you start putting that idea on the canvas/page, you are on a voyage to get back to that original idea.  You get led astray, fall down rabbit holes, become distracted by plots, deceived by characters.  The only way you can see the work clearly is to stand back from the canvas.  That is when you realise that you’re lacking depth, or that you need more highlighting, or perhaps the balance of the piece is leading the eye in the wrong direction.  So you get back in there; darken here, lighten there, until it’s time to step back again and repeat the process all over again.

When I first heard the phrase ‘Kill your darlings’, I thought I was going to have to bump off one of my favourite characters.  Then I realised that it was those lines, paragraphs, or entire chapters that you have an irrational attachment to and can’t bear to cut, no matter how much they are dragging the rest of the story down.  I’ve been revising the first three chapters (which are really crucial for capturing your reader’s attention) and paring back anything unnecessary.  With each sweep, I’m losing more and more of the writing I thought was important, but turned out to be superfluous.  My job at this point is to make it easy for the reader to slip into the story and want to continue reading.

So how do you know when you’re at the end?  When you’ve given your novel all that you can?  Is it when you can’t bear looking at it anymore?  Or is it when you’ve pushed past that point and begun to see your novel as your future readers will?

George Saunders, author of Lincoln In The Bardo, wrote about this process in a recent article for The Guardian

You revise your reader up, in your imagination, with every pass. You keep saying to yourself: “No, she’s smarter than that. Don’t dishonour her with that lazy prose or that easy notion.”

And in revising your reader up, you revise yourself up too.

I wholeheartedly subscribe to Saunders’ idea of revising yourself up and never underestimating your audience or your ability.  As Leonardo points out, there is never really complete satisfaction, but when you can walk away knowing that you’ve given more than you thought you could, that’s a good day’s work.