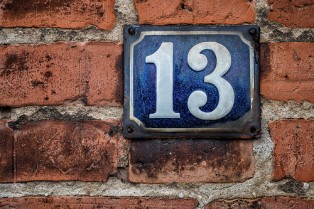 If you are of a superstitious nature and feeling a little bit silly for having a nagging fear of the number thirteen, then be consoled my friends!  You are not alone.  Ireland, the land of superstition as it is otherwise known, is one of the leading Western countries happy to carry on this unfounded belief and protect its citizens from ever having to use this ominous number.

There are a couple of ‘makey-uppy’ reasons in history to support the theory, including the one that Judas was the 13th guest at the Last Supper (was he even invited?)  And we all know how that one ended, hence the number thirteen is not only bad luck but could result in you becoming – as they say in Cockney rhyming slang – brown bread (dead).  Norse mythology also has a thing about thirteen being the harbinger of doom, so between religion and mythology, the fear of this number kind of stuck in our subconscious.
Would you believe that the housing estate in which I live has no number thirteen?  Apparently it’s a very common occurrence, with many estates being numbered only in even numbers, or simply skipping that number altogether.  However, the most obvious sign that this country would rather play it safe than sorry when it comes to dodgy numbers was the introduction of new vehicle registration plates.  The new plates had the year as the first two digits, which was all fine and dandy until 2013 loomed on the horizon and the officials panicked.  Who would buy a car with the number 13 on the reg??  Terrified that the motor industry would implode, the government decided to randomly add the number 1 on to the end and hey presto!  Everybody’s happy.  Apparently 131 is much less scary that the alternative.  Although it never did Brian O’Driscoll any harm…
Don’t get me wrong – I’m not judging.  I’m just wondering why this number should strike terror in our hearts above all others.  Maybe in a few years we won’t even be using it anymore.  ‘Hey, what’s that number that used to come between 12 and 14 again?’ school children will wonder.  But remember next time your toes curl at the number thirteen, in China it’s the number four that gives people the heebeejeebees!

You know what else is happening today? My book The Mysterious Bakery On Rue De Paris is on sale at the ridiculously good price of £0.99/$0.99.  So why not turn this into the luckiest of days and get your copy now!